Seeing the Caribbean: Pissarro, Gauguin and Matisse colouring the other

Seeing the Caribbean: Pissarro, Gauguin and Matisse colouring the other

In 1903, the painter Odilon Redon (1840-1916) recalled the colour work of his late friend and fellow artist Paul Gauguin (1848-1903), writing ‘His colour, though derived from that of an other, belongs to him’.[1] The two artists had met each other at the 1886 Impressionist Exhibition, where Gauguin’s palette was, however, not a success amongst the critics. Félix Fénéon called Gauguin’s palette ‘muted’ and omitted his name from a list of ‘gifted colourists’ at the show, and Henry Fèvre described Gauguin’s colours as ‘somewhat smothered’.[2] Looking back at Gauguin’s oeuvre, Redon clearly had a different opinion. He not only suggested that Gauguin’s palette was different than what was practiced in the French academic painterly tradition, but, more importantly, he argued that the artist’s use of colour was distinctively personal and foreign at the same time. He wrote that Gauguin’s ‘simplifying mode of coloration’ emerged from thought and observation, which could only be appreciated by young eyes not habituated by Impressionist art.[3] Redon also deliberately drew on the figure of ‘an other’ to underline how Gauguin’s colours were transformed in his encounter with the tropics. Not long after the 1886 Impressionist exhibition Gauguin travelled to Pont-Aven in Brittany, where he met the painter Charles Laval, whom he later invited on his trip to Panama. This journey eventually led them to the French colony of Martinique, where they settled for a few, albeit very productive, months. 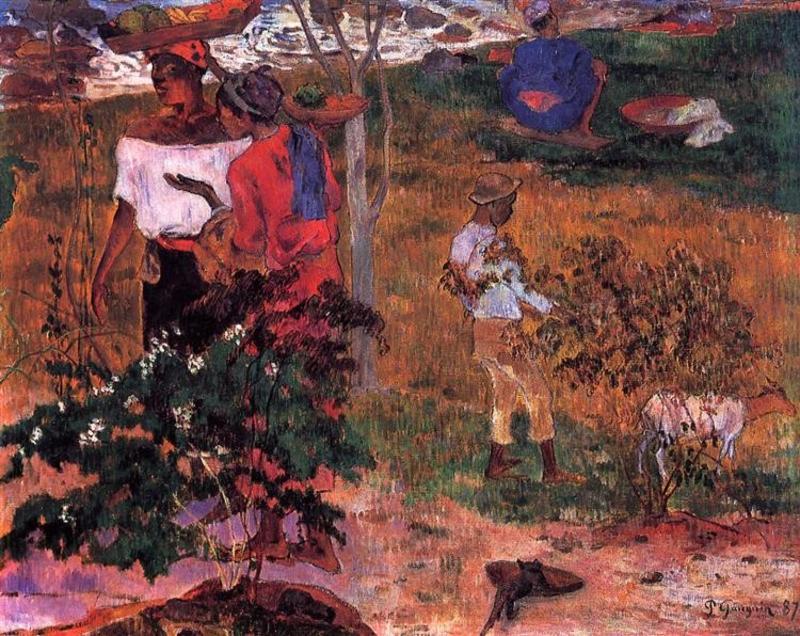 The painting, Tropical Conversation (1887), is one of Gauguin’s experiments with large-scale figures that he made in Martinique. As with his other paintings from Martinique, Gauguin structures the paint by vertically hatching the brushstrokes one after the other, which creates colour fields, only disrupted by the chromatic blocks of the figures. It represents one of his favourite motifs: two women taking a break from picking, gathering and transporting fruit to talk. It is a tranquil scene, where a woman in blue is in the middle of washing her clothes in the background and a young boy looks after a goat as he picks leaves in the pictorial foreground. Taking up most of left space, the talking women are depicted, one with her back slightly towards us as she gestures towards the other woman who looks at us as viewers, almost as if we are sharing an unspoken, intimate moment – like we caught each others’ eyes - across the canvas. This exchange of looks also suggests the prominence of sight(seeing) in the encounter between Gauguin and his subjects. The artist travelled to see the sights (the women in his case) on the island, which he paints and brings home as visual postcards or reminders of him being there, in the tropics. The act of sightseeing appears as an accidental moment, a chance encounter, but it is highly orchestrated. Gauguin spent money to travel afar and made one sketch after the other to create the painting, later to be sold on the market. However, in the scene, Gauguin complicates the one-way inspection: the artist observes the women, yet the woman in white notices him, counters his eyes, which makes him (and us as viewers) pointedly aware of our gawking. While looking at us, the woman effortlessly balances the basket of fruit on her headscarf and wears a white, probably cotton, shirt that reveals her bare shoulders and arms. Here, we see how the contrasting hues between the women’s skin colour and their clothing is a defining feature of the painting, a way for Gauguin to further emphasize the darkness of their skin tone. When we look at the painting, it is as if we are sharing a space with the figures: not only is the woman in white inviting us in with her gaze, we also feel captured in the space with Gauguin’s removal of the horizon.

The painting is an example of how the artist plays with the ambiguity of sight(seeing) in his pictorial language. On the one hand, the woman's look persuades the viewer to share a space of mutual observation. On the other hand, the viewer is left at a distance, positioned on the other side of the foliage in the foreground, disrupting the viewer’s full immersion into the scene. To further emphasise the distance, the other figures do not notice the viewer's presence, as their turned-away body language clearly signifies. As such, Gauguin allows the viewer to imagine as being in the scene, but, at the same time, he pictorially materialises the physical and felt distance between the viewer and the coloured rural workers. It is the sight of the attraction that draws the viewer in but is only met with its hopeless inaccessibility. Gauguin points here to the conflicting nature of the encounter with the tropics: he had the privilege to escape to go "sightseeing" in the foreign colony and to freely position himself as close to “the other” solely because he is not: he does not share their skin colour; he is not a forced labourer and is not from the island, leaving him depended on his fantasy of their shared authenticity and intimacy. In depicting this scene, Gauguin aligns himself with pre-capitalist systems of meaning-production. The scene and its colours signal the privileged position of the artist who are able to reject industrialised Europe and preserve and cultivate the remote cultures of the “savages” and present it to us. Gauguin expressed also this association between colorant and the non-European tradition.

So what did Redon mean when he wrote that Gauguin’s colour was ‘derived from that of the other? As part of the transformations of colour in the nineteenth century, where it became recognised as the primary component of the picture, Redon acknowledges Gauguin’s unusual chromatic experiments. He made to negotiate the coloured body, a body whose national belonging was highly contested at the time. Yet he also suggests in the same breath that Gauguin’s colour still ‘belonged to him’, which further indicates that (in Redon’s opinion), Gauguin did not simply replicate what he encountered on the island. Instead, he re-shaped the coloured bodies into his own vision in ways that left clear traces of him as their maker and; that would position him as a colourist of difference on the artistic scene on the mainland. 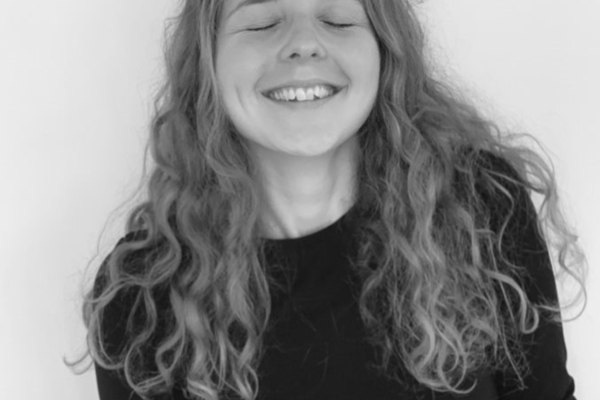