Discovered: a new Rule of Philosophising by Isaac Newton

Isaac Newton’s Principia, first published in 1687, is known for its spectacular demonstration of the principle of universal gravitation. But as with all famous books, its fame has sometimes obscured the fact that it contains many puzzling features, the meaning of which has vexed readers from its publication to the present day.

Perhaps the most famous of these puzzles concerns the ‘Rules of Philosophising’ that Newton added to the second edition of the Principia, published in 1713. These ultra-famous statements, in which Newton appears to set out a methodology for doing natural science, have been quoted innumerable times. Together with the General Scholium – also added to the second edition – in which Newton declared that he did not ‘feign hypotheses’, they have sometimes been taken as a kind of manifesto for ‘modern’ scientific method. Many readers are surprised to learn that the Rules were not even present in the first edition, where in their place stood nothing other than a set of ‘Hypotheses’!

Why did Newton change his famous text so drastically? And what was the real meaning of the Hypotheses and the Rules? A new solution to these ancient questions has been published by Dmitri Levitin in this month’s issue of ISIS, the journal of the International Society for the History of Science. The solution is based on a previously unknown Rule of Philosophising, discovered by Levitin among Newton’s huge manuscript archive. The text dates from between the two editions of the Principia, when Newton planned to call the Rules ‘Axioms’. It is written in Latin on a torn scrap of paper (perhaps explaining why previous scholars had missed it) which Levitin restored by conjecturing the missing words.

The new Newtonian 'Axiom' of Philosophising discovered by Dmitri Levitin. The tear may have been caused by Newton spilling acid.

The discovery allowed for the full reconstruction of Newton’s lost scheme of ‘Axioms’, which in turn explains the meaning of the Hypotheses and Rules. Far from being a set of general rules for doing natural science, these texts were part of a polemical argument deployed by Newton to counter the possibility that gravitation was caused by a weightless matter that filled the space between weighty objects. Sometime in 1685, Newton had conducted a set of ingenious pendulum experiments designed to prove the proportionality between weight and mass, and to disprove the possibility of any weightless matter. It turns out that the Hypotheses, Axioms, and Rules were all designed to provide the methodological underpinning to defend this conclusion.

For Newton, the non-existence of any weightless matter at the macro level meant that it was illegitimate to posit any such matter at a micro level too. If the world was full – as the Cartesians and others suggested – then it would be uniformly dense, which was an absurdity. In other words, Newton’s hugely famous attack on hypotheses was not a general methodological statement, but part of a challenge to what he took to be a very specific ‘hypothesis’: that of weightless matter.

There is a major irony to this discovery. Much of eighteenth-century science – including that which considered itself resolutely ‘Newtonian’ – was devoted to positing various ‘weightless substances’ to explain phenomena such as electricity, magnetism, heat, and light. Little did these ‘Newtonians’ realise that their hero would have been appalled by such theories, and would have dismissed them as illegitimately ‘hypothetical’! One of the few people who did realise this – and who thought about it with great sophistication – was the great French philosopher Émilie du Châtelet, whose Institutions de Physique (1740) was one of the most important texts for the dissemination of Newton’s ideas in France and beyond. For all her admiration for Newton, Du Châtelet (unlike her partner, Voltaire) was independent minded enough to reject Newton’s ideas on this score, because her experiments on fire had convinced her that heat was exactly the type of ‘weightless substance’ that Newton claimed was an impossibility. 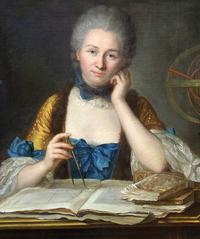 Émilie du Châtelet, who was one of the most perceptive early students of the conceptual underpinnings of Newtonian science

A 1671 letter by Thomas Gale, a college colleague of Newton's, now preserved in Oxford’s Bodleian Library. In the margin, one can just see a tiny drawing of Newton's design for a reflecting telescope

This is the second major Newtonian discovery published by Levitin in the last few months. In the previous issue of Annals of Science, he presented new findings about a much younger Newton. A letter from 1671, discovered in Oxford’s Bodleian Library and written by a college colleague of Newton’s, reported on the reflecting telescope that Newton had invented, before he himself had made his findings public: it even includes a tiny drawing of Newton’s design. This is important because it shows us that Newton was not, as so often portrayed, an academic recluse; rather, he was freely telling his non-expert colleagues about his discoveries (perhaps even over college dinner?).

Levitin, who is a fellow of All Souls, is also a member of the Centre for the History Science, Medicine, and Technology, and a founding member of the Centre for Intellectual History. Together with the History of Science Museum, these Oxford Centres promote a wide range of research and teaching on all the history of all types of knowledge: scientific, humanistic, practical, and social. Those interested in Newton could do no better than to begin with the Newton Project, hosted in Oxford and co-directed by Oxford’s Professor in the History of Science, Rob Iliffe.