For much of the first thousand years after the birth of Christ, Egypt was a Christian country. A lot of political changes took place for Egypt over this period, including shifts between Greek, Roman, Byzantine, and Arab rule. There were also tensions between different groups within Christianity, because the religion was new and different Church leaders had different ideas about what Christians should believe and how they should act. The one constant for much of this was the celebration of saints who died for their faith, the martyrs. 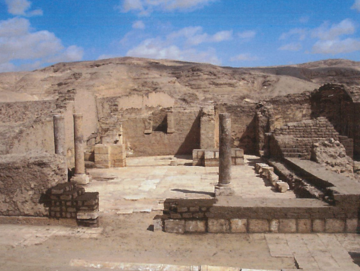 'The church of Apa Kollouthos at his shrine in Antinoopolis, photograph from Peter Grossmann 2014, ‘Antinoopolis the area of St. Colluthos in the north necropolis’, page 284.' 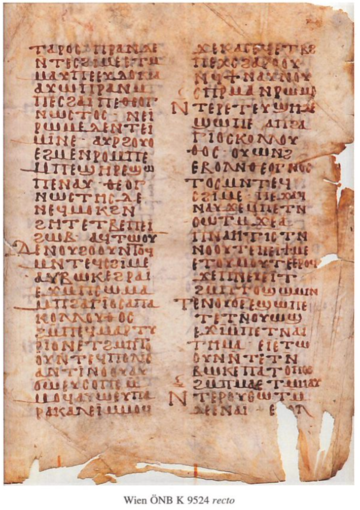 'A page from the hagiography of Apa Kollouthos, on ÖNB K 9524 in the Austrian National Library in Vienna.'

Saints were celebrated in what is called ‘the cult of saints’. There is all manner of sources for this cult. The archaeological sources include shrines dedicated to the martyr saints and objects found within them. The textual sources include documentary texts, which are things like tax receipts, wills, and letters. It also includes a kind of text called ‘hagiography’. ‘Hagiography’ comes from the Greek words ‘ἅγιος’ and ‘γραφία’, meaning ‘holy writing’, which is an apt name because these texts are effectively biographies of the saints. That makes this kind of text seem like a reliable historical source, but in fact it is much less reliable than the documentary texts or the archaeological sources. The hagiography claims that the saints were martyred in the first three centuries AD, but it dates to at least three hundred years after this. So, there is no evidence that the saints actually existed and, if they did, their lives are not portrayed accurately.

Adding to that, what the hagiography says about how the saints were celebrated and what the archaeological sources show are different. This tells us that these texts alone are unreliable, and that a holistic approach needs to be taken when studying them. This means studying different types of sources together to understand which information is reliable and accurate and which is not. A great example of this is a saint called Apa Kollouthos. There was a shrine dedicated to him in a city called Antinoopolis in the middle of Egypt, and all his hagiography except for one tiny fragment says that his shrine was in that city. Therefore, it seems that his hagiography is accurate when it says where his shrine is. Apa Kollouthos’ hagiography says that there were healing miracles at the shrine, which the archaeology also shows, so the hagiography still seems accurate. However, one thing that his hagiography does not mention is that there was an oracle at his shrine. Visitors could come and ask advice about all sorts of life decisions. The oracle would operate by a visitor asking the question and providing two alternative written answers, one positive and one negative. The idea was that the saint would choose one of these answers to be given back to the visitor. Using oracles was not unique to Christians, and this practice existed in Egypt long before Christianity did. So, it seems that the writers of hagiography did not include details that suggested that anything associated with Egypt’s earlier beliefs, when they worshipped the gods that many people associate with ancient Egypt, was happening at the shrines.

So Apa Kollouthos is one example of why we study sources holistically to build a full picture of the past and what was happening in the cult of saints in Egypt.