Mathematical culture in Restoration England: the life and letters of John Collins

The second half of the seventeenth century witnessed a remarkable growth in the mathematical sciences in England, culminating in the publication of Newton's Principia in 1687. This progress was reflected not only in the newly established Royal Society, but also in an increasingly sophisticated level of practical mathematics in accountancy, commerce, navigation, and instrument making. New mathematical learning permeated workshops, warehouses, dockyards, coffee houses, and taverns, and was disseminated by means of printed books, journals, and letters. The most prominent facilitator of mathematical exchanges in Restoration England, and perceived as such by eminent contemporaries, was undoubtedly John Collins (1625-83), whose primary goal was 'the promotion of mathematick learning'. 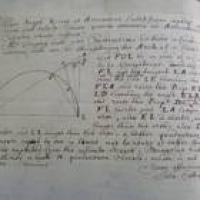 Notwithstanding his importance, Collins occupies a still largely unexplored place in the intellectual and cultural history of early modern England. Although he has long been recognized as a principal figure in disseminating and promoting the work of the young Isaac Newton, he has up to now largely escaped historical scrutiny. Dr Jacqueline Stedall of the Mathematical Institute and Dr Philip Beeley of the History Faculty are undertaking this project, generously funded by the Arts and Humanities Research Council, which seeks to remedy this oversight through the creation of a one-volume edition of Collins's correspondence combined with an in-depth essay describing Collins’s life and work, and situating him in the broader context of seventeenth-century England. A comprehensive study of Collins's life and letters has previously not been possible, because until very recently most of the extant letters have been available only inadequately or not at all. Only by reuniting Collins's letters in a complete edition and by situating them in their social, cultural, and intellectual context will their true significance within a recreated epistolary network become apparent. The edition of his correspondence will in turn enable for the first time a comprehensive study of Collins's life and a thorough appraisal of his intellectual legacy.